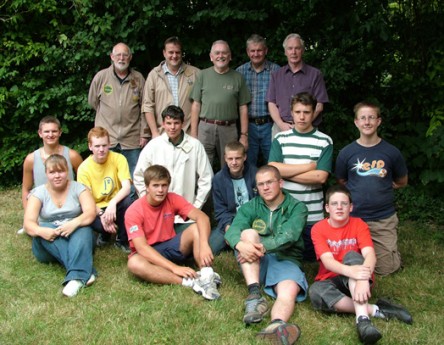 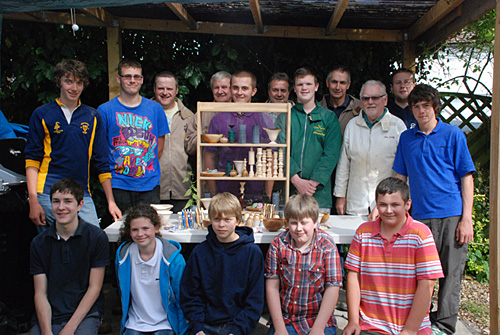 Before discussing the current Young Turners Training Programme it has to be understood why there is an urgent need to encourage young people into the craft.
Wood turning as a profession started to decline with the introduction of semi and automatic machines following the Second World War, by the time I left school in the late 1950’s the out-look for the wood turning craft and profession was bleak, some will say the decline started earlier when the apprenticeship system of training slowed down and later stopped due to the lack of demand for hand turned items, products made from alternative materials also replaced wooden objects in the home. 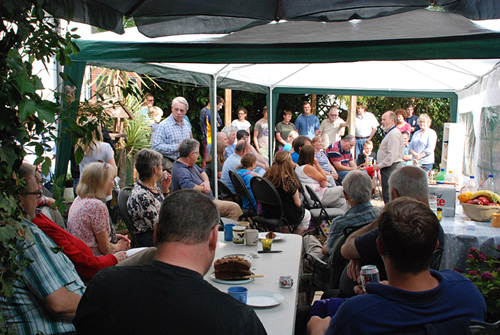 These are valid points, needless to say most of the larger professional workshops closed down.

The outcome for the craft was clear, there were now three main areas of turning, the automatic trade, this was where automatic and semi-automatic lathes were used in a stall type of situation, they supplied all sorts of turnings from table, chair, bed legs, balustrades, newel posts, buns, knobs, handles and dowels, the list is endless, to large furniture makers, supermarkets and hardware stores, most of the automatic machine operators were redundant professional plain turners.
The second area was more fragmented where more professional turners became self employed and had to compete for high quality production work, spindle work, bowls and high end craft work, these turners also sold their work at large fairs, week-end fairs and markets, they worked mostly from smaller well equipped workshops.

The third and last area was where some professional and amateur turners alike started a new and current trend, producing small production runs, supplying shops, galleries with craft work and larger stores with high end turned goods of all descriptions. This area of turning has developed beyond all expectations. This area has seen the craft develop since the late 1970’s into the world of art work, to-day some wood turners or wood artists produce wood art which is highly collectable by private collectors, exhibited in high end galleries and introduced to permanent museum collections.

Going back to the late 1960’s I had met the Master of all master turners, Dennis White, he was an apprentice from the age of 12 and became a master turner at the age of 17 years, even he at that time was self employed as a production turner producing mainly pepper mills.

Dennis and I used to discuss the future of turning, he was concerned that turning as a profession would die out, at the same time he was hopeful it would expand as a hobby, this was exactly what happened.
From that background wood turning has developed steadily as a hobby.

During the mid 1970’s and through the 80’s there was a boom in hobby wood turning and woodworking in general, Alan Mitchell editor of the International Practical Woodworking Magazine started the first woodworker show at Wembley, where wood turning was one of the main features of the show, other magazines followed his lead with shows at other venues, Sandown Park, Alexandria Palace, N.E.C. Birmingham, Harrogate, Craft Supplies, John Boddy, Axminster Power Tools and many others.

During the late 1980’s early 1990’s the British economy was also booming, manufacturing companies making lathes, tools and turning products were in full production keeping up with demand from people who were retired or taking early retirement and taking up wood turning as a hobby. Wood working companies were very supportive of the shows which were very successful. Although the shows were booming we were still not attracting the young, Alan Mitchell and I often discussed this problem, Alan decided to hold a young turning competition, by this time I was actively teaching young turners for free. I offered free tuition as part of a prize for this competition which was later introduced to senior competitions as well.
It was a strange situation, with wood turning booming as a hobby, production work stayed static, woodworking in general in schools was in decline and lathes were slowly being removed from school workshops. It appeared obvious to me that the craft could only expand through a Youth Training Programme or gifted amateurs. I always considered myself very fortunate to have been introduced to the Craft at school, it is a great pity there are very few wood lathes in schools to-day, it is a tragedy that very few children even know what wood turning is, yet alone some parents.

By the late 1990’s several private youth training initiatives had come and gone, some with sponsorship and some without, sponsored programmes for one reason or another petered out, whilst several turners throughout the country taught young turners, A.W.G.B. (Association of Wood turners Great Britain) were lending lathes to needy turners including young people with an interest in turning, the Turners Company ( The Worshipful Company of Turners) were doing great things, placing lathes in handicapped schools, had a flourishing bursary system for developing and needy turners, helping turners in distressed and other forms of charitable work, the Worshipful Company and the AWGB have been and continue to be very supportive of the Craft.

To me it was obvious that a permanent Youth Training Programme had to be  started with or without sponsorship, The ideal situation would be for the AWGB and the Turners Company to be involved.
During 1999 Linda and I moved from Chalfont St.Peter in Buckinghamshire to Hope Cottage, Grateley, Hampshire, there we had a huge workshop which was ideal to host  wood turning groups up to 40 in number, the following years saw my woodturning group flourish.

From 2000’s early years, my workshop tuition increased to include several local turners and some young people, several schools in the area showed an interest in the craft, one local school even started a wood turning club and we started a training programme for Young Turners, there were obvious problems in recruiting young persons under the age of 16 years of age, there are several legal pit falls that have to be negotiated, parental consent was no problem but the prospective parents had to be present during tuition otherwise we had to have a legal guardian to overcome this problem.

It was during those early years I involved another turner in teaching young people in my workshop, Gary Rance was the first, a very talented turner and probably the best production turner I have encountered, at the same time Alan Mitchell became a Freeman of the City and a Liveryman with the Turners Company, Alan and I started to discuss the possibility of the Turners Company (TC) sponsoring a programme starting at my workshop, by 2004 I had held several training sessions in my workshop with parents present, at this stage the TC through Alan Mitchell were showing very positive signs of supporting and sponsoring the programme.

As  previously mentioned the WC have been very supportive of the Craft in many ways, by donating lathes to handicapped schools, needy or distressed turners, bursary award system to help gifted turners develop their skills. But most of all the members of the TC who continue to support the Craft in personally in their own time by visiting the main wood turning events and venues throughout the UK.

At one point I had hoped that the RPT (Register of Professional Turners) would get more heavily involved in sponsoring and supporting a Programme for Young Turners, following a personal presentation to the RPT where I warned of a crisis within the craft for the lack of interest from young people, I expected some follow up and more discussion on this matter. Sadly only a few professional showed any interest.

During one of my club meetings we were discussing the possibility of the programme when one of our members Reg Hawthorn future Chairman of the AWGB suggested we may also get the AWGB involved, I personally saw this as an ideal opportunity, this suggestion was exactly what we needed, the two main bodies in woodturning to get together and support a permanent programme. It was at this stage that sadly Alan Mitchell became very ill and died some time later.

At this time Rookwood School in Andover had formed a small woodturning club at the school under the supervision of their technical teacher Steve Ungi, their second venue was my workshop, for two years we held events to a programme during week-ends and holidays, this was approved by the school and supported by the children’s parents, this was very successful, but sadly was discontinued when a new headmaster was appointed. However this may have been the blueprint or preliminary introduction to a more permanent programme. 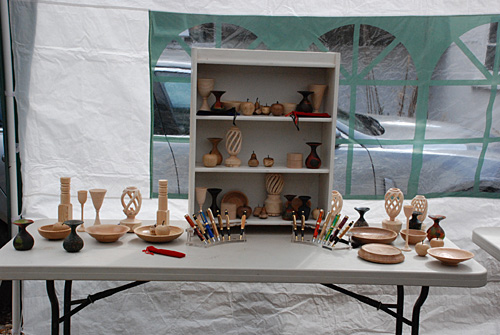 Up to this point the programme at Grately had been sponsored and supported by my friends within the Craft. Following the death of Alan Mitchell several members of the Turners Company, in particular members of the Court, Peter Ellis, (My Sponsor) Rob Lucas, Penrose Halsham, Peter Gibson and several others who were very supportive of the craft and saw a Youth Training Programme as part of the way forward in promoting and expanding the Craft.
In 2006 both the TC and the AWGB were both in full support of the programme, the programme in Grateley was firmly established, with sponsorship from tool companies, including companies supplying safety products, finishing products and other companies supplying wood. Peter Hemsley owner of Tool Post was the first to supply on loan several Wivamac lathes. (FULL LIST OF SPONSORS AVAILABLE).

It is with thanks to the late Tony Witham Chairman of the AWGB at the time for his input regarding the launch of the first week-end of the Young Turners Training Programme (YTTP) at Grateley and taking part as one of the first tutors.
Since the launch of the Grateley venue the AWGB have appointed Peter Bradwick as the AWGB programme Manager, part of his responsibilities is to liaise with the TC, with his appointment I see this as a full commitment to the programme by the AWGB.

Another initiative by Reg Hawthorn past Chairman of the AWGB was to approach the Boy Scouts movement and have approved within one of their badges wood turning as a craft achievement.
I had originally hoped there would be at least 7 or 8 YTTP venues throughout the UK, 3 in Wales, 4 In England and at least 1 in Scotland, at one stage we had 5 venues, I am hopeful that we will be able to expand the Programme in the near future.

I thank the Worshipful Company of Turners and all their members for their continued professional support, I also thank the TC charity board, the Howe Committee without which the programme as it is to-day would not continue on its current course.

I also thank the AWGB members and sponsors for their continuing financial support, Reg Hawthorn for the use of his support and the use of his Marquee, Ray Key President of the AWGB and Liz his wife for her annual donation of two lovely large fruit and nut cakes, (I love them) and their continued support.

A special thanks to all our sponsors for tooling, turning products and other materials including wood. See the sponsor file for full details.

Thanks to Shirley and Jonathan CUFF collectors of wood art, as the Daniel Collection for their generous donation of three Axminster mini wood lathes and one donated by Axminster Power tools.

I thank Nicholas Somers for his support in several ways, his term as chairman of the Howe committee when the Programme was in need of a strong ally, his skill as an auctioneer to raise funds for the AWGB and TC charities and his spiritual input to the programme.

Finally I have to thank all the past and current tutors within the programme for their continued support. All their names are published with the photographs.